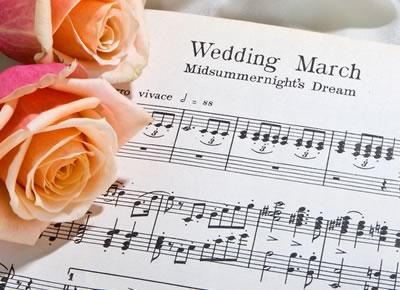 The Signing of the Register

During the time spent in the Lady Chapel, the organist will be willing to play any suitable music of your choice, whether traditional or modern. You may wish, for example, to have some music played that has a special meaning to you both. This is also the appropriate time where you can make your ceremony unique by arranging to have a friend, relative or group entertain your guests by singing or playing your own choice of music and tunes. However, most people opt for having the choir sing an anthem, and please do speak to me if there is a piece that you would like to be sung. If you are not having the choir the church organist can play traditional music. The following pieces are popular:

As you leave the lady chapel and walk arm-in-arm down the aisle as husband and wife, you will want the organ to bellow out music that is triumphant, joyful and celebratory. Traditional recessional music includes: